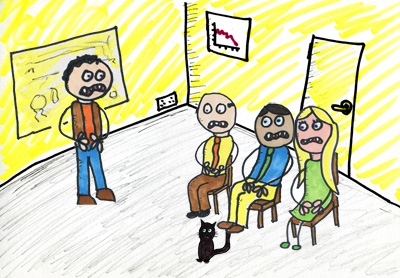 In corporate life it seems to me that something odd happens when we enter the space that contains what we perceive and label as ‘work’.  Outside of this space we are happy to participate in experiences that excite us because they have large elements of unpredictability and surprise, such as going to a football match, going to the theatre, going to a pub or a party.  We might engage ourselves in activities that are more energetic, where we use our whole bodies such as running, yoga or playing tennis.  We may also may have some very creative hobbies such as painting, knitting, decorating or creating fantastical stories through playing with our children.

However, the moment we perceive we are ‘at work’ it seems our individual and social comfortableness with the qualities that are associated with these types of activities diminishes.  Instead we seek to create and maintain an environment that is more ordered, predictable and controllable, therefore temporarily deep-freezing our spontaneous, adaptable and creative selves that we allow to thrive outside the office doors or the factory gates.  As a result of this there are many consultants around the world, such as myself, who specialise in helping strike a balance here – maintaining the benefits of structure, order and control whilst nurturing spontaneity, collaboration and creativity to enable change and innovation.  It is a job I love so much that I don’t even consider it ‘work’ any more!  However, many consultants I know agree that whilst it is a very exciting and fulfilling role to be brought in to play in organisations, the fact that we are often trying to take our clients precisely where they don’t want to go in the workplace can be rather anxiety-provoking.  Both for them and us!

I can recall designing many workshops in the past where I have thought to myself that the participants are going to get annoyed, scared, angry, confused or disappointed with me because what I am asking them to do seems weird/stupid/pointless/irrelevant.  Inevitably when the day itself came I would introduce an activity and would notice that some of the participants would appear annoyed, scared, angry, confused or disappointed and my own anxiety would rise and the voice in my head would go “It’s all going horribly wrong – what do I do now?”  However, over the years I got better at adapting and ‘working live’ in the moment and as soon as I noticed these emotions surfacing I was able to tweak and change the activity in a way that seemed to settle the participants nicely.

I felt very pleased with myself that I was learning to improvise with the negative emotions of groups and individuals – altering myself in response to noticing something arising in others.  However, it was only when I began to learn about my own psychological needs and my own projections that I realised a flaw in the skill that I had developed!  Projection is a psychological phenomenon where a person unconsciously attributes (or projects) the emotions they are feeling onto others.  In doing this they experience the other as having the feelings that are in fact their own.  A simple way I try to explain projection is as follows:  If you are a pet owner or know somebody with a pet then you will be familiar with human characteristics such as personality, emotions, sense of humour (etc) being projected onto, say, a cat.  A cat that to everybody else just seems like a normal cat but who the owner perceives as having this buzzing personality, sense of humour and complex human emotions.  (To the psychologists amongst you I guess this may also be transference or anthropomorphication?)

As I learnt more about my own needs for affection, control, inclusion (etc) as well as my own patterns of negative emotions, I began to wonder how many of the emotions I experienced participants as having in my workshops were in fact my own.  This lead me to wonder if I truly was ‘working live’ if all of the adaptations I had been making were in fact in response to my own emotions, not those of the participants.  Had I avoided taking the workshop where it needed to go as a result of my own anxiety?  Had I been improvising and responding to myself rather than others all this time?  The complicated thing here was that it was also just as likely, potentially more so, that what I was picking up on were the emotions of the participants and by not responding I also wouldn’t be working live either!  Aghhh!  Reflecting on projection in my work raised many interesting questions, resulting in a paradox within which I was rather stuck and confused.

I decided that the best way forward to work within this paradox was to get into the discipline of asking myself the question “Whose emotion is it anyway?” whenever I found myself in situations where my head, heart and gut were picking up on something.  Over time I developed some simple games to play in-the-moment to help me explore this question more deeply.  I continue to play these games to this day, using them as strategies to ensure I’m ‘working live’ with the genuine emotions of the participants whilst heightening my awareness to when it is in fact me and not them.

When experiencing an emotion, stick with it for a third longer than is comfortable.  If during this time the emotion has dissipated then it was likely to be my own projection.  The ‘thirds’ bit isn’t scientific – just a bit of logic to trick the left brain.  A ‘third’ could be an extra 10 seconds, 10 minutes or even longer.

If the feeling remains, check it out with the participants as a question.  “Is it just me, or is everyone suddenly really anxious?” or “Help me out here – I’m experiencing folk as really angry.  Is anyone else experiencing that?” or “I’m totally lost and confused here – is anyone else?”  If others share the emotion then work with it.  If it is your own – lean into the discomfort by admitting “OK – it must just be me!”  To be able to do this, one has to be able to get over one’s fear of being perceived as mad, bad or wrong through sharing one’s vulnerability with participants who may well be expecting you to be flawless.

Game 3: Invite the emotion for tea and make it your friend

This is normally something I’d do as a result of identifying a repeating projection of mine – seek out other experiences, in a slightly safer environment, where I can feel that emotion even more intensely, understand it better and make friends with it!  This could be other workshops, simulations, training or other experiences that lead to that feeling – keep your friendly emotions close and your enemy emotions even closer!   Through doing this I have found that I can ‘hang out’ with and study the emotion better without the pressure of time or being in a ‘live’ workshop situation getting in the way.  This is one of the reasons why I continue to train regularly in improvisation as it gives me a fantastic lived experience of a variety of emotions and being right on my learning edge.

Our own emotions present us with an incredibly powerful ‘dashboard’ as to what we are experiencing so these games are not designed to eliminate them but to simply explore where our ‘dials’ and ‘gauges’ may be slightly out of calibration.  These 3 games/strategies are not a fool-proof way of answering the question “Whose emotion is it anyway?“, given the incredibly interconnected, complicated nature of our minds and our process of relating I doubt there is such a practice.  However, I have found them to be incredibly powerful in the work I have done and, if on some occasions it is me and not them then I’ve felt so much better and had fun playing the games to find out. 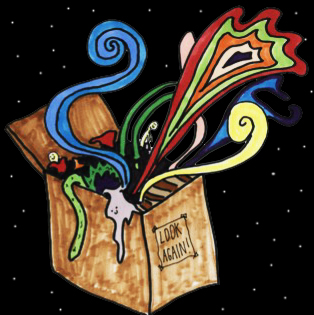